Planning ahead is required before choosing a VPN solution to make sure that the VPN solution addresses your needs.

We will next discuss about the available VPN solutions on the market these days:

Let's begin with PPTP. This is also called as the point-to-point tunneling protocol.

Now although this was a widely-used VPN solution on the old windows machines, it is not considered secure anymore.
There are some known problems with PPTP protocol. Let's see what these are:

PPTP uses TCP port 1723 and IP protocol 47. This is important when it comes to permit PPTP traffic to pass through a firewall if you're configuring such a vpn.

With the latest in security threats, VPNs are becoming more and more popular.
You'll often see SSL and TLS used together, however, we need to know that SSL has some security flaws, whereas TLS is considered to be secure (until now).
This type of VPN uses TCP port 443. Now this is considered firewall friendly, because at least in an outbound direction from within a network, normally TCP 443 traffic is allowed out because it's used for secure web browser communications, in other words, HTTPS.

This is often used for a client-to-site VPN (remote access or gateway vpn), so you won't see SSL or TLS VPNs used in site-to-site VPNs. 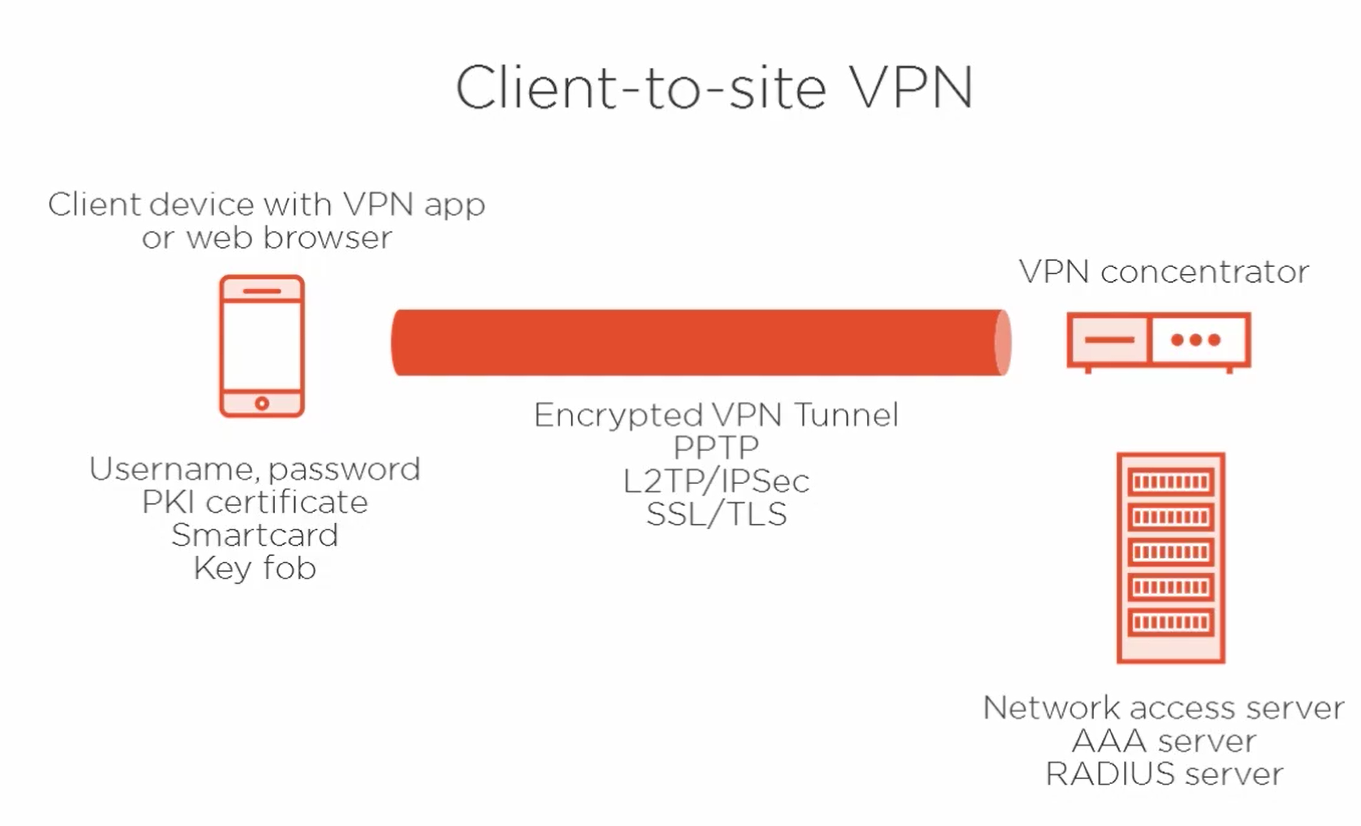 On the screen, we have a basic diagram of a client-to-site VPN, where over on the left we've got the client device with either a VPN client application installed or using a web browser such as for an SSL VPN.
Now the user on the client device can authenticate in a number of different ways:

Now over on the right we've got the VPN appliance that is capable to receive multiple client VPN connections simultaneously.
And after that tunnel has been established, that can be done using PPTP, L2TP/IPsec, or SSL or TLS, but after that's established, it's only because successful authentication will have occurred to establish the encrypted tunnel.

And pictured at the bottom right of our diagram, that can be done, ideally, using a network access server.
We usually do not want credentials checked for users directly on the VPN concentrator itself for security reasons, because it is considered an edge point device.
Now the network access server can also be called an AAA server or a RADIUS server. They all really mean the same thing. It's another centralized authentication host outside of the VPN device.

these are used to link offices together, for example, over the internet or over a dedicated leased line.

So on the left we've got our Site A VPN device, on the right our Site B VPN device.
Notice we don't have VPN clients involved, at least not directly at this point. So our encrypted VPN tunnel, then, could use PPTP or Layer 2 Tunneling Protocol in use with IPsec. So the clients at each site would then be able to connect to the other site by going through this VPN tunnel. It's simply a matter of IP routing from the client perspective in a site-to-site VPN scenario.

When this error is received you may need to do one of the following: enable tunnel isolation...

How to install and configure Shadowsocks libev SOCKS5 proxy server on Centos and Ubunu...

VPN Encryption and Security Protocols Whenever you are planning and then deploying a VPN...

OPNSense site to site with SNAT

OPNSense site to site with SNAT First of all let me provide some insights on why the need of...